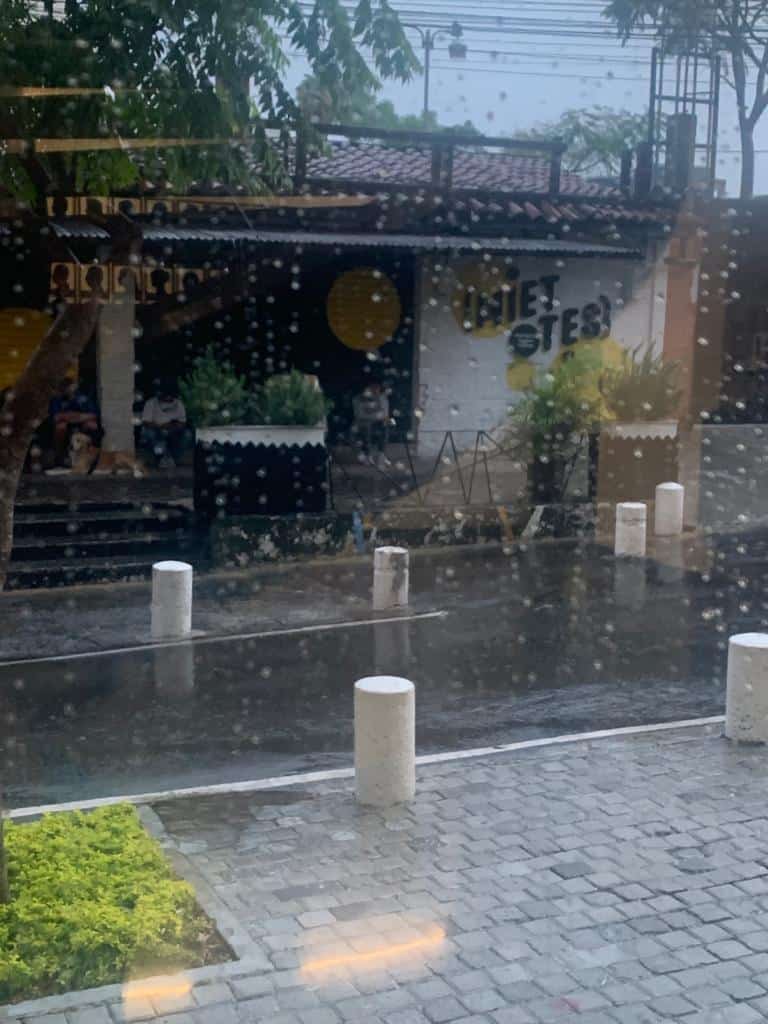 There I was stood behind a glass wall in the entrance of a carpark, staring out as the rain poured down outside. The sky was dark grey and ‘pouring’ is a generous word to describe the type of rain coming down, it was so heavy and relentless that it had started to leak through the glass wall and was creating puddles by my feet.

I had made the rookie mistake of forgetting about rainy season in Guatemala. Anyone would think that I hadn’t lived here for years, thankfully I can be forgiven as I had just returned from 6 months in England. From the moment I got back I was keen to plan something with the youth. I had missed them immensely and couldn’t wait to see them and catch up. So, I had invited them to eat tacos and get coffee in a nice part of the city on a lovely Saturday afternoon. Completely forgetting the time of year and the high possibility of rain in the afternoon.
I wonder if I had also forgotten that for some reason people in general don’t know what to do when it rains in Guatemala. It is like the rain starts and the world stops. Being form England, and Yorkshire at that, I am used to rain. Granted the rain in Guatemala is on a whole different extreme level, but still rain is just water and life goes on. Well in Guatemala it doesn’t, people literally stop what they are doing, or stay where they are until it passes. Thankfully it usually only lasts an hour or so.

Anyway, my lack of thinking ahead left me stood watching the rain and waiting. The rain started just as the youth were on their way to meet me from their various locations, and of course none of us were prepared for rain. As I waited I received phone calls and messages expressing the need to wait until the rain stopped, one of them was stranded beneath a shop front, another couldn’t continue as he was coming on a motorbike.
Oddly, I didn’t mind at all, there was a time when a situation like this would have stressed me out or caused me to panic or feel annoyed at the delay and impact on the rest of my day. Living in Guatemala has changed me, I view time differently now and often intentionally plan ahead for activities to happen later or last longer than scheduled. With the youth I carve out plenty of extra time to allow for delay and also to not rush the time together.
In that moment, come rain or shine, I would have waited all day just to see them all again.
Therefore, the long and damp wait was worth it.

I got a message from one of the youth telling me he was close to the meeting location, taking shelter under a restaurant veranda. He had run between shelters at different points when the rain was lighter. From my vantage point, I was effectively in a room made of glass, I peered out and there he was sat in a huddle on stone steps under a poor excuse for shelter. It was easier to simply go out to him than to try and get his attention or explain where I was. So, I braved the rain and dashed across the street to him. His face lit up when he saw me and I quickly brought him into the shelter of the carpark entrance. One by one they arrived and each time I went out to greet them. It was amazing to be with them all again.

Once everyone had arrived and the rain had let up enough, we headed to a cool little taco place I like. Tacos are very popular in Guatemala and in my experience the best places are the cheap, less pretentious restaurants. I was pleased my choice got the approval of the youth, they are not a fussy bunch, but I can tell when they really like things or are just being polite. We were a smaller group than before, just the core really, but that made it all the more special. We sat and took our time talking and catching up, jokes were flying and they asked all kinds of questions about England and my family. Curious to know what it is like there. I got to hear about what they have been doing while I was gone and find out how they are.  My Spanish was less rusty than I had feared which was great.

We decided to enjoy the lovely evening and take a moment to walk around the area. There was hardly a trace of evidence that it had just been pouring with rain.
The evening air was cooler than normal but pleasant, a clear sky turning to indigo as we walked and enjoyed the live music from various street performers. Talent on every corner. It was time to have a hot drink, to sit and talk a little while longer. No one was ready for home yet. We found a nice little artisanal café close by and the conversation focused on deeper things as we sipped our hot chocolates, coffees, and chai tea. I asked them how they really felt, what life had really been like throughout the pandemic and while I was away. It was a time for honestly and vulnerability. I won’t share the details; all I can say is that it was positive and healing and I am very proud of them all. These young people have incredibly challenging lives and trusting adults does not come easily. No one said it but I am sure they had wondered if I would even come back. A promise does not mean a lot to people who live under constant disappointment. Trust must be earned and respect gained through consistency and reliability.

In truth I do very little to ‘help’ these young people, but what I do is, show up and keep on showing up. All in God’s strength and for the love He has placed on my heart for people here in Guatemala. Spending this time with the youth again helped ground me. The first few weeks back in Guatemala had been hard for me, a lot of transition, change and reverse culture shock (in reverse again). I was still adjusting, they really helped. I wonder if they realise that I am more blessed than they as we attempt to share some of life together. It is a privilege to be welcomed in even just a little bit.