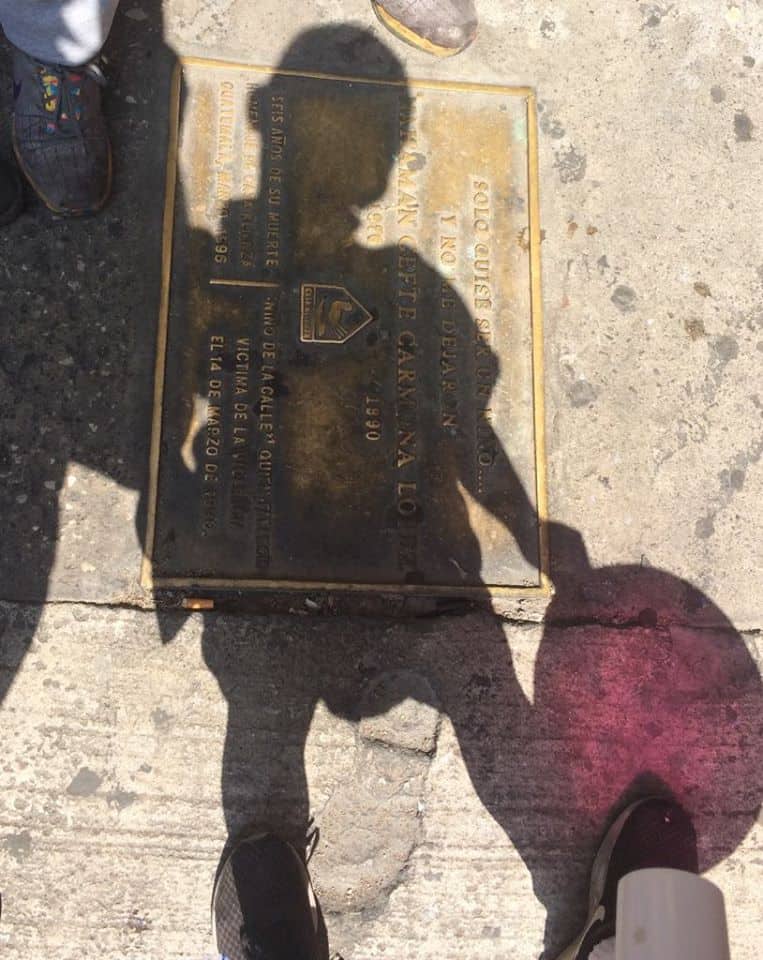 “Solo quise ser un niño . . . y no me dejaron,” “I just wanted to be a child, and they wouldn’t let me.” These heart-wrenchingly sad words are carved into a plaque on the streets in zone 1, Guatemala City, placed there to commemorate the life and death of Nahaman, killed at the age of 13.
Nahaman was a young boy living on the streets when one day the police found him and beat him. The plaque now lays inset in the ground in the spot from which his broken body was picked up and taken to hospital where he later died from his injuries. Nahaman was just a boy when he was murdered for no other reason than that he lived on the streets, alone and without rights.

Nahaman was just one of many street children murdered by the police in Guatemala during the 90’s and each year on 12th April, ‘The International Day of the Street Child,’ we commemorate those lives lost. Yesterday, to mark the occasion, myself and many others took part in a march for children’s rights. We marched to raise awareness of the situation of ‘at risk,’ street connected children. We marched to raise awareness of those living on the streets, and we marched for Nahaman. We will not forget.

The day of the march

Street Kids Direct joined with other organisations and individuals who work with and serve people living on the streets and ‘at risk’ children in Guatemala. A group of us, including around 20 children, walked from our centre in zone 9/4 to meet staff and volunteers from ‘Sigo Vivo,’ ‘Mojoca,’ ‘Go Guatemala’ and ‘café refrescante’ in zone 1, along with some young people who live on the streets. Together we marched down Sexta Avenida, the main street in zone 1 to parque central (central park).
We held banners and signs, and the children blew whistles and shouted, each to raise awareness and stand up for the rights of vulnerable and shunned people.

It was on the march to parque central when we paused by Nahaman’s plaque, as we gathered around silence fell and I’m sure I was not alone in feeling moved at such a poignant moment. Duncan Dyason, Director of Street Kids Direct UK, shared Nahaman’s story. A few solemn moments set aside where everyone, including the children, listened intently showing their respect and understanding the importance of the occasion.
It is unimaginable that a group of adult males, police officers no less, would beat a defenceless child to the brink of death. Yet here we stood remembering that reality.

When we reached central park our energy was renewed and the children ran around laughing and playing in the fountain. We sat to enjoy a snack together and sent out a live video on social media, to raise awareness online and enable our supporters to be involved.

As I watched our precious children playing, running around, spraying water over each other, my heart was both heavy and elated. There have been too many children like Nahaman, who’ve lost their lives in such horrific circumstances, including the young girls who died in a fire at a government children’s home in March 2017. We were reminded of them too as we went to visit their memorial set up in the square close to the fountain, a circle of wooden crosses one for each girl who died, surrounding a plaque that pays tribute. Another tragic event where vulnerable children were not protected as they should have been.

There is still so much suffering, too many children living in extreme need and in such ‘high risk’ situations. Yet there are also amazing people, who daily care and make sacrifices for the rights and needs of vulnerable people in Guatemala City. On that day I felt honoured to be surrounded by such brave and servant hearted people. I looked at the beautiful children we work with and felt a sense of hope, knowing that their lives will be different because of those I’m working with.
What a privilege it is to have been able to take part in such a special and hope filled event.